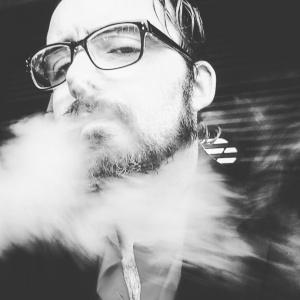 I am a career artist (Gallery/Street/contract), writer (freelance/Personal), and Designer (freelance/contract). I live in My New York Art Studio, where I create the bulk of my work, Whether I am using Paint or pen, I put all of myself into my work. I am obsessive. Compulsive. I have an addictive personality when it comes to many things. It is hard for me to love, but those whom I do find myself loving, I love for life. friends, lovers, chosen family... And Art and words... For better or worse... I cannot fall out of love once I dig my talons into someone or something... My heart never forgets.

This website has helped me find peers, and inspire me to write more of the type of work that I enjoy making. Raw and honest work without the expectation of crafting something perfect... just something real. I love that about this site and will continue to support Matt and his website as long as I can afford to.

Absurdism: the belief that human beings exist in a purposeless, chaotic universe.

Humanism: Humanism is a philosophical and ethical stance that emphasizes the value and agency of human beings, individually and collectively, and generally prefers critical thinking and evidence (rationalism and empiricism) over acceptance of dogma or superstition.

Pantheism: a doctrine which identifies God with the universe, or regards the universe as a manifestation of God. It uses metaphor and analogy without literalism to poetically frame the Universe and reality as well as science, within spiritual reference. The prime purpose of Pantheism is to Paint a sacred picture of reality without bowing to superstition or fantastical reasoning without evidence.

Agnostic-Atheism: disbelief or lack of belief in the existence of God or gods. Does not claim to know within absolute certainty that god exists or does not exist, but given evidence, both scientific and philosophical, chooses to believe that in all likelihood humankind is on their own, birthed from chaos.

2 > "When I look upon seamen, men of science and philosophers, man is the wisest of all beings; when I look upon priests and prophets nothing is as contemptible as man."

3 > "Most men are within a finger's breadth of being mad."

1 > "As a matter of self-preservation, a man needs good friends or ardent enemies, for the former instruct him and the latter take him to task."

1. > "As iron is eaten away by rust, so the envious are consumed by their own passion."

2. > "Observe your enemies, for they first find out your faults."

3. > "The most useful piece of learning for the uses of life is to unlearn what is untrue."

1. > "We live on a placid island of ignorance in the midst of black seas of infinity, and it was not meant that we should voyage far."

3. > "It is absolutely necessary, for the peace and safety of mankind, that some of earth's dark, dead corners and unplumbed depths be let alone; lest sleeping abnormalities wake to resurgent life, and blasphemously surviving nightmares squirm and splash out of their black lairs to newer and wider conquests."

4. > "The most merciful thing in the world... is the inability of the human mind to correlate all its contents."

1. > "Deep into that darkness peering, long I stood there, wondering, fearing, doubting, dreaming dreams no mortal ever dared to dream before."

2. > "Ah, distinctly I remember it was in the bleak December; And each separate dying ember wrought its ghost upon the floor."

3. > "Words have no power to impress the mind without the exquisite horror of their reality"