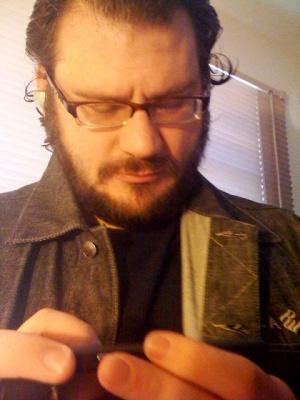 Poetry Comes from a Tilted Mind

White River - Saturday, November 15, 1997
The woman from White River is at the crux of The Path not Traveled... Yeah, there is a lot of Guilt. The Recent Death of Raven's Mother Complicated Things Immensely and started a spiral that i am only now recovering from... slowly

I am an Office Assistant with a poet's soul... sometimes I wonder how he is doing without it.

The HHM in My tag comes from a tarot reading

Roughly meaning that I get fulfillment from showing others the way to do things, and that is where I have always been...
And that in this life I needed to either learn from others deception or learn my own...
About a year after I got that reading, I met someone that I fall in love with, and this tells me how bloody accurate the reading was
When I first met raven, her lie was such that I narrowly escaped jail at least once.
Should she choose, she could take my freedom even today with just one more lie, or even just telling the truth.

The Cameron is an homage to Richard Cameron, a Scottish priest that was killed on the road because he dared to tell people that priests were only helpers, and not required... (For some reasons the Catholics and Anglicans that were battling it out over whither the king or the pope was the head of the church took slight exception to this)

Born in an Army Hospital in 1973, it was my home until 1990 after which I was marooned in Virginia when dad retired as a Sergeant First Class.

I tried to enlist in the U.S. Army after high school 1992,
But the weight restrictions on enlistment after the Graham Rudman era burned that bridge for me,

During the summers since 1990 I had been working as a Grass Cutter laborer or electricians assistant I had figured that I would be loosing the weight in Basic, confident in an ASVAB that was better than 92% of the applicants.
Years later, after the towers fell, I tried again, and the recruiters were not desperate enough for someone whose equilibrium weight was 285 lbs.

From 2003 to 2006 I worked as A Grass Cutter Laborer, my tool of choice was a two handed weed-eater that i was quite good with. They also made me drive tractors, when they were desperate... a few accidents, injuries, and damaged tractors eventually convinced them that Me + Tractor = Bad Idea (there were jokes about wearing a helmet... giggle snort)

From 2006 to Current, i work as an Office Automation Clerk in Family Housing - This is my one source of pride, i Serve those who serve as best i can.

But I still regret not being permitted to serve.

I have been married twice so far,
And it feels that this one is ending soon...

Appears that I need to pull off the Band-Aid soon...

Why do I hurt the women I love?

Why do I let them hurt me?

Our weight affects our fertility, and not having children is something that is also destroying my marriage, and sometimes i lie to myself and tell me that is why i started to fall.