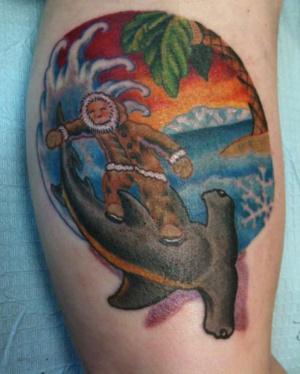 I write poetry in my mind. Sometimes I put it onto paper.

In his early years, Steve McKennon was adopted by an Inuit family when he washed up off the coast of Alaska after a failed attempt to be the first toddler to circumnavigate the globe on a surf board. In line with ancient tribal tradition, he was given the name TropicalSnowstorm by his father, famed sorcerer and whale hunter Qanik Uqaqtualuk, during a solemn ceremony involving a sweat lodge, bare feet, polar ice, and hanging from bear claws that were inserted through his pectorals. He later discovered these were not the traditions of his adoptive tribe, but were instead based on a SciFi Channel horror movie. He and his father did not speak for several years after this discovery.

To bring honor to his tribe, as an adult TropicalSnowstorm has pursued many global adventures, such as hiking up a volcano in Ecuador, riding elephants in Thailand, touring the Ajanta Caves in India, surfing in Sri Lanka, and climbing up to Dracula’s Citadel at Poenari. He even successfully chatted up a local girl in Transylvania, who, despite her having an accent that was spot-on, turned out to not be a vampire.

Eventually he settled in Virginia where he met and married his wife, who encouraged him to quit moping that his misspent youth was over and focus on something besides petitioning to have Labor Day changed to Circus Day. Mrs. Snowstorm is a Jamaican and, in addition to being extremely good looking, can be quite persuasive. He still thinks juggling clowns and sword swallowing bearded women would be a much better theme for a holiday than "labor," but he complied with his wife’s wishes. Instead, his efforts are now focused on writing a novel and producing short stories that fall within the New Sincerity movement.

He and the noble but totally not funny when he takes a joke too far Qanik Uqaqtualuk eventually reconciled and now spend family time every year harpooning whales in the icy waters off the coast of Alaska. They also sponsor and coach a non-lethal whiffle bat seal clubbing team from a local high school, which has held the regional championship title since 2015.

"Tell me of the Devil's tale,
the one where the sky once fell in love
with the depths of the ocean floor.
Deep in love, they smuggled their passion
between the Atlantic and the Gulf."
(from "When She Reads His Literary Tone, She Gains Stars in Her Eyes.", by Tattoo Goddess)